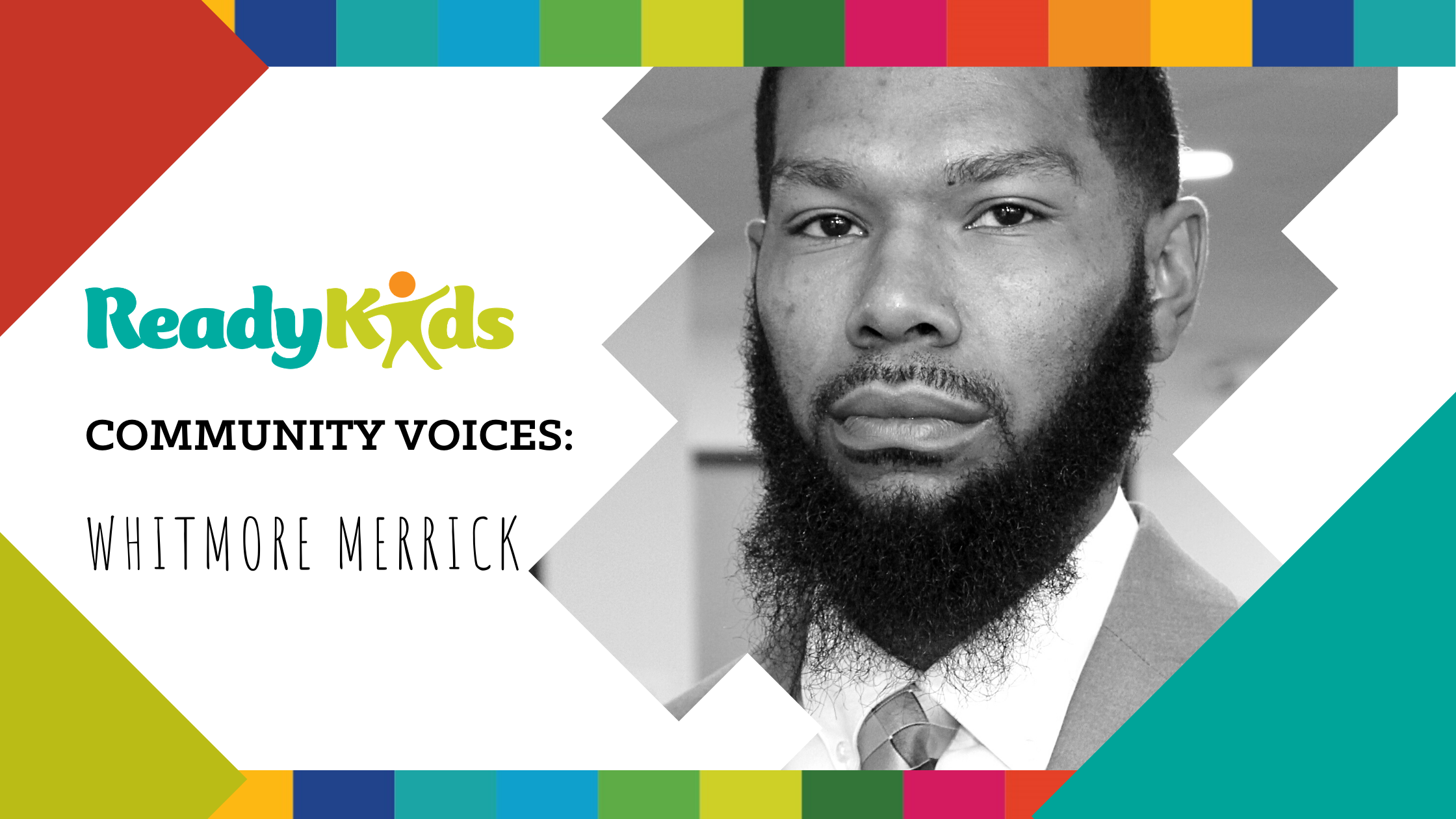 Posted at 16:59h in Community, Real Dads by Ready Kids

“Community Voices” is a series of blog posts to elevate community voices, especially those of people of color. We invited individuals, without stipulations or rules, to submit their writings and we paid them for their time. We wanted to offer this space for them to share a first person account of what the last eleven months has been like for them. We value their thoughts and ideas. The content in this blog post is a reflection of the personal and professional experiences of the writer. The views and opinions of the guest contributors are their own. To contact the author, please see the end of the piece. 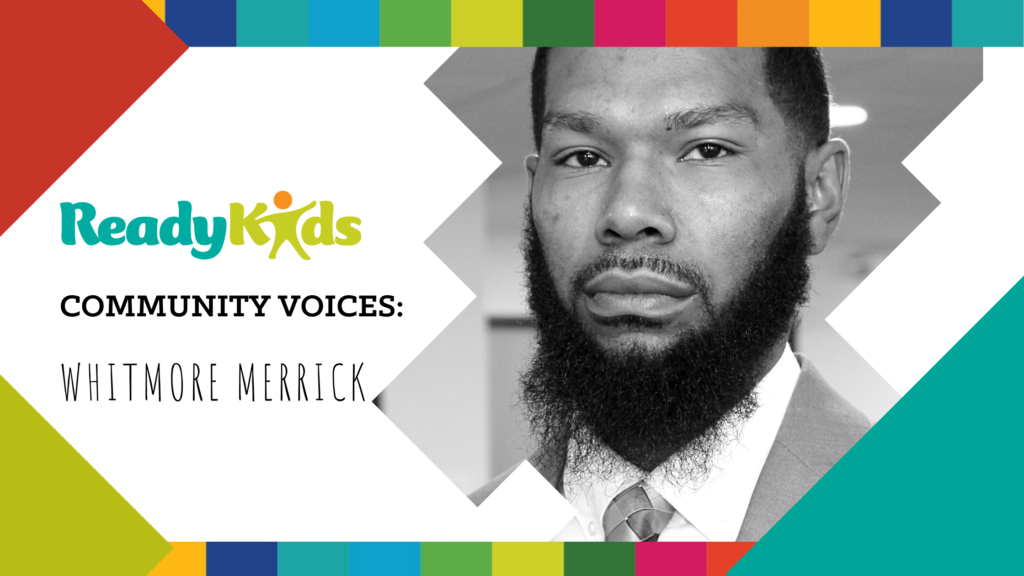 My name is Whitmore Merrick.  I’m a father of three beautiful children, ages one, six and fourteen.  I’m a creator at heart, with a knack for music.  I’m an entrepreneur who has started several businesses. I was born in Washington D.C. and raised in Charlottesville. I have been convicted of a felony.

When people hear the last sentence, none of the rest matters. I am defined by the worst thing I did in my life. I’ve been put in a class of people that has been very hard to escape. I try to do my best to avoid having the door closed in my face, but everywhere I turn I’m told it’s not my right to do something. I couldn’t vote (I recently got my rights restored). I can’t find decent housing. I can’t even chaperone my children’s field trips.

I’ve been in and out of incarceration a few times. But, the last time was the hardest.  I lost my mother, and my son was born.  That’s where Eddie came in and I joined REAL Dads.  When I lost my mother, he was there. When I got out he helped me figure out how to be a father. My son was five-years-old by the time I came home.  I had to step up. It was my first time being a parent, and I didn’t have my mother – who was my only parent – to guide me. My motivation to stay out of incarceration was to be a father. I wanted my son to know me.  It was powerful to have Eddie as a support outside of my direct family and friends to show me how.

When I first got out of incarceration, 10 years ago, I worked for a recycling plant. My coworkers were former inmates or on work release. We made minimum wage doing hard physical labor.  After three years of that, I began my own direct marketing opportunity. Though some people think direct marketing is a Ponzi scheme, it opened doors to me that I otherwise wouldn’t have had. I began to see myself as business-minded, surrounded by other people seeking better lives.  I created a “Freedom for Felons” movement as a part of my journey in networking marketing, offering alternative streams of income for those with felony convictions.  Meeting lots of other people, good people, is what got me on my road to resilience, sparked a change and gave me hope.

A few years ago, I was hired by Home to Hope, an initiative of the City of Charlottesville to impact and inspire “time-served” individuals by introducing resources, providing peer support, and advocating for fairness. It’s through that work that I realized I’m not alone.

It’s deflating to try to help other people going through the same thing.  Finding housing for people getting out of incarceration is difficult. They are so limited because of their felonies.  Some of them are lucky to get into boarding rooms, but it’s $600 per person and you’ve got 6 or 7 individuals in a 3-bedroom house.  The housing is unhealthy, unsafe, moldy, and smelly. I can honestly say that I’ve seen jail cells cleaner than the places I’ve had to place participants in.

Home to Hope has a peer support group on Mondays and Wednesdays.  One of the pros of the pandemic is that we’re still able to hold virtual meetings.  Talking with others and expressing what we go through is therapeutic.  We’ve really built a community in these groups.  It’s informal, but educational, to hear struggles and successes.  Listening to all of our struggles, it’s clear that the system isn’t created for people to return to society and be better citizens. We continue to be punished, long after we’ve served our time.

A Change in Virginia Law Would Change My Life

I’ve avoided politics for a long time. In the Black community, politics are shunned.  It’s not the cool thing to do. It’s not something for us. We’ve never been included, and there is a lack of understanding because of that. But, my work has led me to educate myself, start getting into the places that affect us most, and speak directly on the issues. I’ve become passionate about advocating to make Virginia law change to allow people who have contributed back to society to expunge their criminal records.

Virginia is one of only 7 states that don’t allow for expungement or sealing of records after a certain amount of time.  There are fears that offering expungement to people like me will spike crime, but studies show that expungement recipients pose a lower crime risk than the general population, because we can earn an honest living again. We’ve seen prison.  We don’t want to go back if we can help it. I’ve talked to a few law makers, and they always bring up public safety or public health as an issue. Who is that pertaining to?  Who is the public?  Because if I’m a part of the public. I am not experiencing safety or health.

Expungement will help me regain confidence when applying for housing and employment. Expungement can give me a clean slate to become a truly productive citizen and have access to better living conditions. It will help my children, who also suffer from the mistakes I made before they were even born. I’m just trying to do the best I can for my family. A felony crime has been a lifetime conviction. The only true second chance is expungement.

I recognize that there is always someone going through more than what I’ve been through.  I’m blessed to be here mentally and physically. But, the reason things stay the same is because the people who make laws are disconnected from the people who are affected by them.  I’d like to connect us.

Whitmore Merrick is a Peer Navigator at Home to Hope. He is also an aspiring entrepreneur who has started a transportation company called “Merrick Adventures in Transportation, LLC” and clothing line called “P.U.R.E. Pizzazz”. You can find him on Instagram.