30 Nov For some transgender youth, family support is the difference between life and death 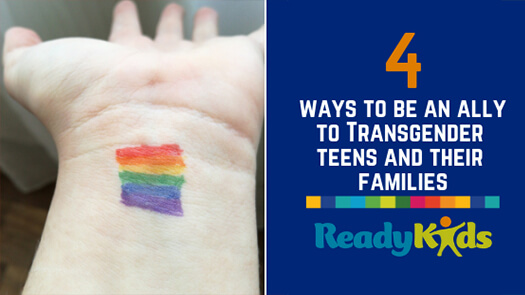 30 Nov For some transgender youth, family support is the difference between life and death

In the last two years, the ReadyKids Teen Counseling Program has seen an increase in participants who identify as transgender. Someone who is transgender has a sense of personal identity and gender that does not correspond with their birth sex.

Nationwide, about 0.7% of American teens identify as transgender, but nearly 2% of the participants in the ReadyKids Teen Counseling program have identified as transgender or gender variant. That’s an almost 200% increase than what you’d expect to see.

“There are a lot of variables that lead into it,” said Jordan Leahy, Teen Counselor. “People who are transgender are more visible than ever in our society, but there is also a political climate that is trying to deny they exist. This is increasing mental health needs.”

Coming out as transgender in your teen years comes with a variety of struggles, particularly with parents. For instance, studies show that familial rejection can lead transgender youth to engage in behaviors that put their health at risk, trigger depression and other mental health problems, and in the worst of cases – result in suicide. Furthermore, lack of family acceptance after coming out as transgender is one of the top reasons teens runaway or are kicked out of their homes by their parents. Among homeless youth, 20-40% are transgender, and most face discrimination when seeking even temporary shelter. 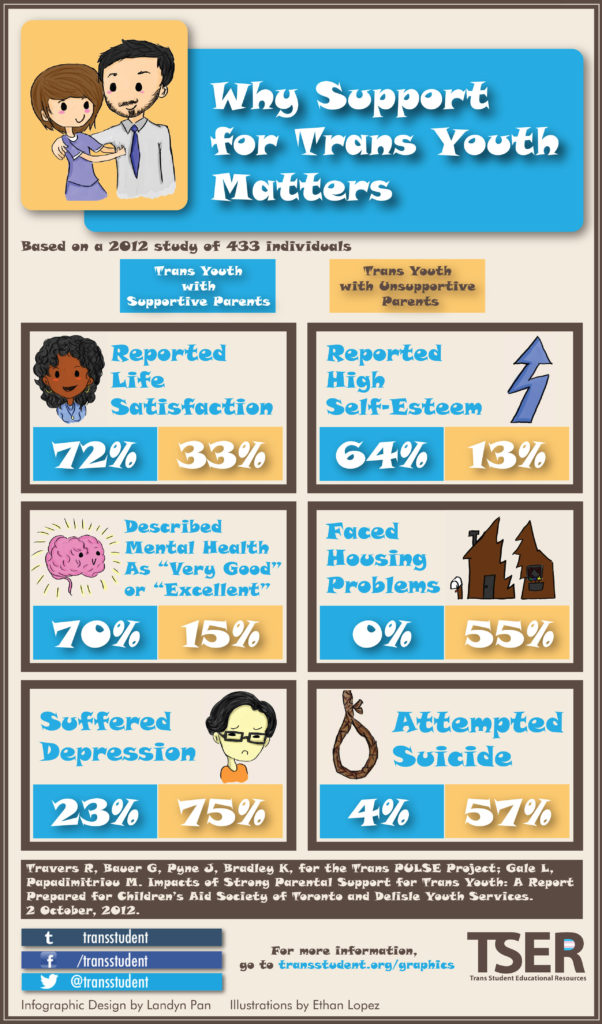 However, familial support does the opposite. Parents who accept their child’s gender identity can act as a buffer against bullying and bias outside of the home. In other words, for some transgender youth, family support can be the difference between life and death. The ReadyKids Teen Counseling Program wants to help families and teens in this journey toward acceptance and support.

Here are 4 tips our counselors offer on how to be an ally to a transgender teenager.

1. Use their preferred name and pronouns

“A name is significant, and we don’t always have an understanding of that in our culture,” said Leahy. “If a person has chosen a new name for themselves, it’s usually because their given name is in some way hurtful. If you live in a home with someone who doesn’t acknowledge who you are and can be cruel to you for who you are, that has a huge effect.”

Most importantly, if you mess up (as everyone who has known someone as a different gender for a long time is likely to do), quietly correct yourself.

“Many people are well intentioned and want to be supportive, but if you miss a beat and say something wrong and everyone can get hurt,” said Dee Keller, Senior Teen Counselor. “Mistakes do happen. It’s okay to go back. It’s okay to learn. It’s okay to do things differently.”

2. Break the connection in your mind between gender identity and sexuality

“When teens come out as transgender, this can be confusing, especially for parents,” said Leahy. “But gender identity is not the same as sexual identity.” Transgender does not mean gay or lesbian. Gender is about who you are, not who you are attracted to.

Trans Student Educational Resources has a helpful diagram called the “Gender Unicorn” which explains how gender identity, gender expression, what gender someone is physically attracted to, and what gender someone is emotionally attracted to all exist on a spectrum. For example, it’s possible to be born female, transition to male and still be attracted to men. It’s also possible to be born male, and later identify as genderless (part male, part female), but that doesn’t mean you’re A-sexual and not interested in a relationship. A wide variety of possible combinations exist, over 7 billion!

A person who is questioning or exploring their gender identity may take some time to figure out what’s true for them. They might, for example, use a name or pronoun, and then decide at a later time to change the name or pronoun again. Do you best to be respectful and use the name and pronoun requested.

Being transgender is no longer taboo. With people like Laverne Cox in Orange is the New Black and Caitlyn Jenner from the Kardashians being open about their identities, trans people are more visible than ever. GLAAD has a number of resources to expand awareness of trans issues. Locally, the Cville Pride Community Network has a compiled list of resources as well.

Check out art, literature and films about trans people. Barnes and Noble has a helpful list of Young Adult novels about transgender characters, IMBD has a list of movies featuring trans main characters, and an online comic called “Assigned Male” has great cartoon strips about the daily challenges trans people face. 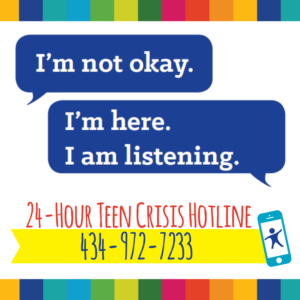 As a parent, if you come to a point where you don’t know what else to do, the ReadyKids Teen Counselors are available to talk any time, 24/7 to any teen or parent of a teen in the Charlottesville area. Call (434) 972-7233.

“Trans kids are more vulnerable. We want to have the space to welcome these kids,” said Keller. “The runaway risk and family conflict is high for LGBT kids, having a supportive family is a huge resilience factor. We hope to equip families and teens.”

The ReadyKids Teen Crisis Hotline is a free service that can be reached at any time by calling (434) 972-7233.