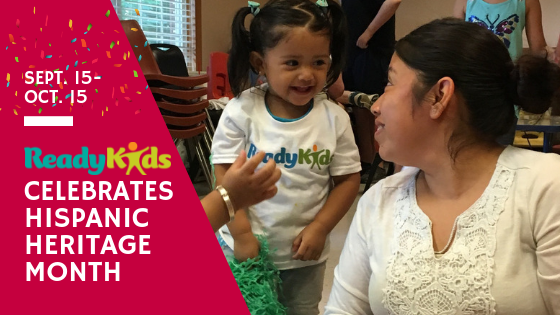 Posted at 19:07h in Community, ReadySteps by Ready Kids

Hispanic Heritage Month runs from Sept. 15 to Oct. 15. It celebrates the long and important presence of people in the United States whose ancestry can be traced back to Spain, Mexico, the Carribean, and Central and South America.

At ReadyKids, 16% of our participants are Hispanic or Latino. That’s about 1,440 Latino children, families and early childhood educators in the Charlottesville-area who have been impacted by ReadyKids. We honor them this month by telling their stories. Three stories from three different ReadyKids programs will highlight both the stress and resilience of the Latino community in and around Charlottesville.

The first story this month is from ReadySteps’ Bilingual Family Coordinator, Karolina Medina. ReadySteps brings educational playgroups to six of Charlottesville’s most diverse communities to encourage parents as a child’s first and best teacher. For Medina, she identifies with both the stress and the resilience of the greater Latino community with which she works.

Even though she has been in the United States for over 13-years, her parents live in her native country of Venezuela. Venezuela is a once oil-rich country that is now run by a dictator and on the brink of economic collapse. It’s painful to think of her family who is still there.

“In Venezuela no one can find anything they need. It’s frustrating because children are hungry. They’re not going to school. Children who need medical attention in the hospital die, because there isn’t help. No one can save these little ones,” said Medina.

“The only people who are surviving in Venezuela are people with families like mine, with people in the United States who can help. We send them money so they can buy the basics. At this point, even an egg is a luxury in Venezuela. Everything is extremely expensive. How do you live like that? That’s why people are leaving. That’s why people are willing to come by themselves and leave their families behind, so they can send something back to help. But it’s still a separation. It’s very hard. Nothing is easy.”

Even though Medina works hard to support her family in Venezuela, she doesn’t let the struggles of her home country keep her from encouraging and supporting families here in the United States as well.

For Medina, the one thing she feels she can offer to lessen the sense of isolation and fear Latino immigrants experience is a listening ear.

“Having bilingual staff is one of the best things ReadyKids has done to reach out. They help people not feel alone,” said Medina.

“A lot of moms, at least in my case, tell me a lot about their personal lives. They see that someone listens to them and understands them who works with an American agency. The work that we’re doing to let them know what resources they have access to helps.”

With Medina’s work with ReadySteps, she interacts with people from a variety of diverse backgrounds. She has seen that even the English-speaking ReadySteps workers have gotten creative on ways to interact with families who arrive at playgroups with English as a second language.

Hope. Laughter. Companionship. Is there anything else that makes stressful times more bearable? The safe community that ReadySteps creates allows Latino families to be completely themselves, even in the midst of struggles and especially during Hispanic Heritage Month.