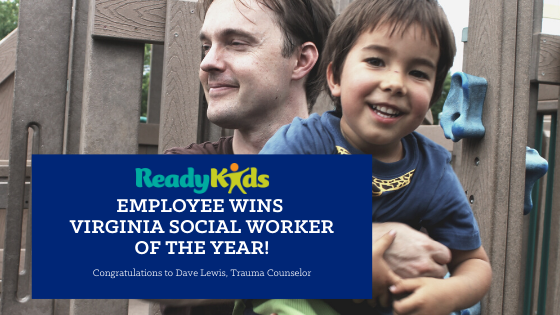 ReadyKids is thrilled to announce that one of our social workers is the recipient of the 2020 National Association of Social Workers (NASW) Virginia Social Worker of the Year Award.

Dave Lewis, who has been a Trauma Counselor at ReadyKids since 2018, won for his exceptional leadership, taking risks to achieve outstanding results, and contributing to the positive image of the social work profession.

Two families who participate in the Inside Out Counseling program nominated Lewis.

“Dave Lewis has truly changed my life,” said a mother whose child is attending therapy with Dave.  “We were absolutely floored by the organization and research he applied to my daughter. He has been genuine and a role model my daughter needed to fight through her trauma and trust men again.”

Another participant, Greg Robertson was a child when he began seeing Dave after surviving a brutal physical attack.

“At this time, I am in college.  I still text Dave now and then just to say hi,” said Robertson.  “I really would like to get a Masters in Counseling so that I too can help kids that have been through trauma.”

Though in his nomination Lewis was described as “fearless in assisting any and all populations,” his particular passion is working with LGBTQIA children and youth.  Mary Sullivan, a Case Manager the UVA Teen and Young Adult Health Center, wrote a letter in support of Dave’s work with transgender teens. 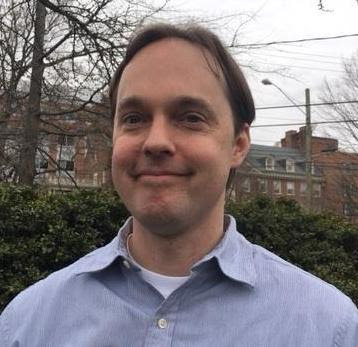 “Most of the teens with whom I work have trauma histories, and most feel marginalized, isolated and misunderstood,” said Sullivan.  “Dave’s visceral empathy and omnipresent gentle wisdom are palpable and comforting.”

He goes above and beyond

In addition to his role at ReadyKids, Dave works part-time as the facilitator of an Adult Homicide Survivor Group with Virginia Victim Assistance Network (VVAN).  Group facilitators and staff brainstormed together often about how to achieve consistent attendance in support groups statewide.  Lewis offered creative and effective solutions.

“Again, he went above and beyond his allotted work time to go back to participants in his region and discuss how to remove barriers to attendance,” said Dina Blythe, Homicide Survivor Support Group Coordinator for VVAN.  “He now runs one of our most successful Homicide Survivor Adult Support groups in the state.”

Even in the ReadyKids office, Dave quietly does behind-the-scenes work like shoveling the walkway after a snow or sharpening colored pencils for the waiting room without any prompting.  He leads by example and with humility.

“Dave is thoughtful in all that he does- whether it’s planning an intervention for a client, supporting a co-worker, or sharing a community resource,” said Shannon Noe, ReadyKids Director of Youth Counseling.  “He is passionate about helping children heal and a joy to work with.  So much of what he does flies under the radar, I am thrilled for him to be recognized with this award.”

ReadyKids is honored Dave Lewis chooses to work for us.

Dave Lewis virtually accepted his Social Worker of the Year award at the annual NASW conference in Williamsburg, March 26-28.  Help us in congratulating Dave!